They Say Feminists Have no Sense of Humor…


Some say feminists have no sense of humor. I found myself wondering if this applied to me as well, when I caught a glimpse of the posters recently released by the Israeli anti-occupation group "Solidarity Sheikh Jarrah". The posters, which use the image of rape in order to emphasize the crimes of the settlement enterprise, specifically target the illegal (even under Israeli law) settlement of "Migron". They were posted on the movement’s Facebook page on Sunday and promptly brought about such heated criticism that they were removed several hours later. 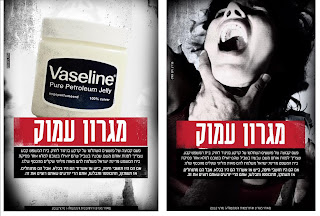 The first poster presents a vivid image of a woman being strangled, possibly raped, while the title plays on the name of the settlement Migron and the similar-sounding phrase “deep throat”.[1] The caption reads as follows:
"Once, a group of criminals took hold of a land illegally. The court ruled that they should be evicted. Now, for them to kindly agree to follow the court's order, the State of Israel is paying hundreds of millions of shekels of our money. If they were residents of Haifa, Beer-Sheva or Ashdod, they would have found themselves in prison. But they are settlers. So shut up, bend over and swallow; after all, you know you want it."


The second poster presented  an image of the lubricant "Vaseline", tastefully implying anal sex, over the same text.
It was not, of course, the mere vulgarity of these posters that brought about such immediate outrage, and which caused their eventual removal and the publication of a rather tentative apology. Nor did the criticism focus on the use of rape as a symbol for the occuption; rather, the issue was its implications for the reprsentation of women.
These posters, as some of the respondents argued, are situating women or homosexuals as the "other"  in whose shoes the reader does not want to be, and calling the public to shake off the grips of the settlements – precisely what a woman being raped cannot do. It was of course not the intention of the posters' designers to encourage or condone sexual violence; but they nevertheless normalize it, presenting it as a constant condition, a "state of nature". If, then, it cannot be avoided, at least we have to fight back in order to release ourselves from a similar position in other spheres. To simplfiy somewhat, the logic of these posters is akin to a labor union using the slogan "we are not black slaves" to improve its employment conditions or a Mizrahi Jew crying out against being treated like a plain Palestinian.
After removing the posters, the movement published an apology, admitting that the posters were improper and regretting the hurt feelings they had caused. This did not, however, ease the tension, as some Solidarity supporters did not understand what all the fuss was about while the critics posed doubts regarding the value of the apology, even accusing Solidarity of outright misogyny.
Solidarity Sheikh Jarrah rose from a grassroots initiative of Israelis and Palestinians fighting against the eviction of Palestinians from their homes in the East Jerusalem neigbourhood of Sheikh Jarrah as a result of courts enforcing the ownership claims of Jewish settler organizations. The spontaneous struggle began with marches from West Jerusalem to Sheikh Jarrah, which were followed by demonstrations every Friday, police suppression, arrests and generally a lot of attention. Solidarity, the organization that resulted from the struggle, deserves major credit for creating an alternative to the grim wave of nationalism sweeping Israeli society. For many, it symbolizes the revival of the Israeli left in the last two years, breaking from the old, institutionalized and ineffective ways of opposing the occupation. In other words, it made opposition to the occupation sexy again.
Spaghetti-strap feminists.
Regardless of these achievements, accusations against the movement as being apathetic to feminist issues and even misogynistic are not new. Another similar tension arose over a year ago, when an official message of the movement called for women coming to the Friday demonstrations in Sheikh Jarrah to dress in a way “respecting the feelings of the residents of the neighborhood”; i.e. not in revealing clothes. This request brought to the front the traditional confrontation between liberalism and multiculturalism, which the Middle East could not claim for its originality. But it wasn’t only the disagreement over this matter of principle that motivated some feminists to declare an intifada on the movement, but rather the indifference of prominent solidarity activists to the feminist claims, presenting the occupation as the only issue of principle on the table; everything else is just not serious enough. This was clearly emphasized by the insult “spaghetti-strap feminists”.
What I find bothersome is not that some activists see feminist issues as secondary; the primary sin is rooted in the attempt to delegitimise criticism by creating a dichotomy between being against the occuption and caring for feminist issues. This artificial dichotomy was seen for example in calls, posted in the same heated Facebook discussion to “come to demonstrations, fight against the occupation, and to make a difference, for once.” This instead of sitting in front of the computer spreading antagonism – because we gals can only talk. One of the respondents even went further, claiming that he does not recall any feminists getting arrested or returning home with a black eye.
Needless to say, the “feminist camp” is comprised of people, women and men, who see the struggle against the occupation as a primary purpose and participate in it, within or outside of "Solidarity". A discussion of the same issues could have been framed as a question of strategies and means, but it was rather presented as a conflict between 'us', the fierce objectors to the occupation and 'them', all the rest. This conditionalizing of critique – 'first join, then criticize', reeks of arguments refuting criticism of Israeli soldiers' behavior in the occupied territories. In such cases, responses to anti-occupation criticism often scolds leftist 'draft-dodgers' for not having taken part in the dirty work, then washing the dirty laundry outside.
These two positions of the solider and the activist – obvious differences aside – share a significant dose of hubris; they both see their personal sacrifice for a greater purpose as a valid weapon against critique. The protectors of the controversial posters kept emphasizing throughout their electronic debate that the harsh criticism does not respect the hard work invested voluntarily by the activists of Solidarity. But their logic is somewhat distorted, as the combination of hard work and a superior purpose does not make them immune from critique. It is quite an old-fashioned position. Did not the perception that the “ends justify all means” lose its popularity long ago?
Adi Livny is a political scientist from Israel. She currently works for the Willy Brandt Center for Political Encounter and Communication in Jerusalem.
[1] The title in Hebrew is "Migron Amok" ((מגרון עמוק – the later means "deep" and garon, i.e. "throat", plays off the name of the settlement Migron, all in all  a paraphrase on the idiom "deep throat".
Share |
Posted by Christoph Dinkelaker at 18:47