Interview with Jamil Sayyed - »Germany is responsible for my detention«

For four years Jamil Sayyed, former chief of Lebanon's General Directorate of General Security, was detained as one of the main suspects in the murder of former Lebanese Prime Minister Rafiq Hariri. Robert Chatterjee and Christoph Dinkelaker met Sayyed in Beirut this April. In this interview he lashes out against the German UN-Investigator Detlev Mehlis as well as against Germany's foreign intelligence agency BND and the German news magazine Der Spiegel. A German translation of this interview was published in the German quarterly magazine zenith. 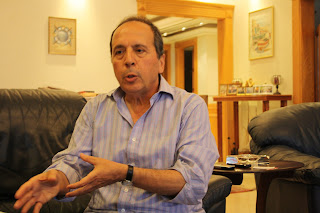 Alsharq: What would you do if you met Detlev Mehlis today?

Jamil Sayyed: The first feeling that would come to my mind is that I would have to vomit.

What led to your detention – and to your release?

It was a long battle that lasted for 4 years to get freed from my political and arbitrary detention. I was never exposed, neither by Detlev Mehlis nor his team , nor to any witness, proof or charges. On August 30 2005, British officer Ken Korlett from the United Nations International Independent Investigation Commission (UNIIIC), came to me with a letter, sent to me by the president of UNIIIC Mr. Mehlis, who had himself signed the paper. That Search Warrant read: »According to witnesses heard by the commission....Jamil Sayyed should be considered as suspect...«. From the day they presented the letter to me and multiple times later on, I asked them: Where are your witnesses? No answer!