Four months after the beginning of the revolution – What’s new in Egypt?

Four months have passed since the beginning of the revolution in Egypt on January 25. The regime has changed, but what else? Did the relationship between the state institutions and the people change since Husni Mubarak was forced to resign? And how do Egyptians assess the security situation in their country these days? How did Social Media inspire Egyptians before and after the revolution? And first of all – how do people celebrate and remember their successful Intifada? 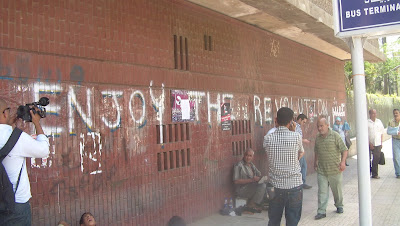 Today we went to the place where it all began – Tahrir Square, in the heart of Cairo. There, symbols of the revolution are still present. They continue to remind the Egyptians the historical moments which occurred in this place. The burned building of Mubaraks former party overhanging Tahrir square brings back to mind the past times.

The atmosphere in Tahrir Square is very festive. In the central garden of the place, people continue to meet every afternoon and dance to the rythm of a deafening music. Men are painting the Egyptian flag on the arms of the passers-by. A brush and three small cans of paint: white, black and red are suffiscient enough to maintain the spirit of the revolution on the place. 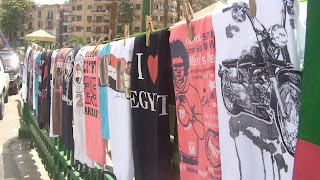 In Tunisia, almost all the symbols of the protests disappeared from streets. The tags which had filled walls as a consequence of the sit-ins that took place in the Kasbah were rubbed after the departure of the demonstrators. Facebook groups called to maintain these tags which represent a legacy of the Tunisian history. But it was not judged this way by the government. The Kasbah place welcomed the real actors of the Tunisian Revolution, inhabitants came from the most discriminated regions. Those who suffered the most during Ben Ali’s days, and those who gave their blood and brought freedom to the Tunisian people. Places like Kasbah and Tahrir should remain symbols of the voice of the people. Kasbah and Tahrir have to be the places of memory to keep in everyone’s mind that freedom has been hardly taken and that it should not be lost again.

We also spoke with people passing by about their experiences and expectations for the coming weeks, months and years. Right in front the Mugamma, the huge headquarter of Egyptian bureaucracy, we met Muhammad Abdel-Nour. He is working at a court and told us that things have improved at his working place over the last couple of months. Before the revolution people who wanted to file their cases were often sent away by the state institutions or they had to pay bribes to make their voices heard, Muhammad told us. Now the behaviour of the employees has improved, money is not necessary anymore to issue a complaint at the court. In general Muhammad Abdel-Nour seemed to be quite satisfied with Egypts deveolpment since the beginning of the uprising: „Egypt is great after the revolution“.

Muhammad Abbas agrees: „Many things have improved since the revolution“, the young man from Sudan told us and added: „The Egyptian people are just great.“ The guy sitting right next to him under a tree was not so optimistic however. „The revolution only changed the system, not the behaviour of the people“, he told us, „Many people don't show respect for anything, just look at this place“, he added pointing to what once was once a grassed area close to the Mugamma but now more or less looks like an improvised waste dump. Muhammad feared that the revolution might be misused by certain people. „For example certain people refuse to work or go on strike just because they are not happy with their boss or they are lazy and claim that they are continuing with the revolution. But this has nothing to do with revolutionary ideas.“

Toqa, a young Egyptian woman we met near the entrance to the Sadat Metro Station in Tahrir, also was not entirely happy with how things went since the downfall of Mubaraks regime, but for different reasons. She was very dissatisfied withe the security situation since January. Harassment against women was even more widespread than before the revolution she informed us. And police and army still would be unwilling or uable to fulfill their duties, Toqa complained. „They just don`t care if women are harrassed in the streets.“

Ragab, another Egyptian we met at Tahrir Square stressed the same point: „There is no security from army or police, the people have to protect themselves and the security must come from every single Egyptian.“ However, four months after the Egyptian people stood up against the dictatorship Ragab acknowledged that change has come to Egypt, but he let no doubt about his hopes for the future: „Much more has to happen in Egypt over the next months.“

As we all know, the social networks have played a main role in igniting the Egyptian revolution, from where people had started approximately 5 years ago sharing and collaborating content all over the online networks; Facebook, Twitter and YouTube.

People started to share manifestations of police violence, injustice and corruption, what’s unique about social media that each Egyptian had the ability to express his anger and raise the voice of dignity asking for freedom, everyone had contributed something; video or photo, at the end, Facebook became the main source of sharing Content for the Egyptians.

If we had a look on Facebook insights before the revolution, we will find that we only had 6 million users who are using Facebook in Egypt and what’s interesting that this number is doubled and tripled during the last 4 months reaching more than 15 million users.

During our tour in Tahrir Square on the 25th of May which is exactly 4 months after the starting day of the revolution, we have discovered very interesting findings:


And in my personal opinion, here are 4 reasons why social media works great with the Egyptian revolution:


I believe that the Egyptian street is experiencing a various forms of awareness, they are aware of what’s happening around, though the most of them don’t understand the mechanism of Facebook but they definitely know it’s the revolution inspiration.
Share |
Posted by C.Sydow at 10:55